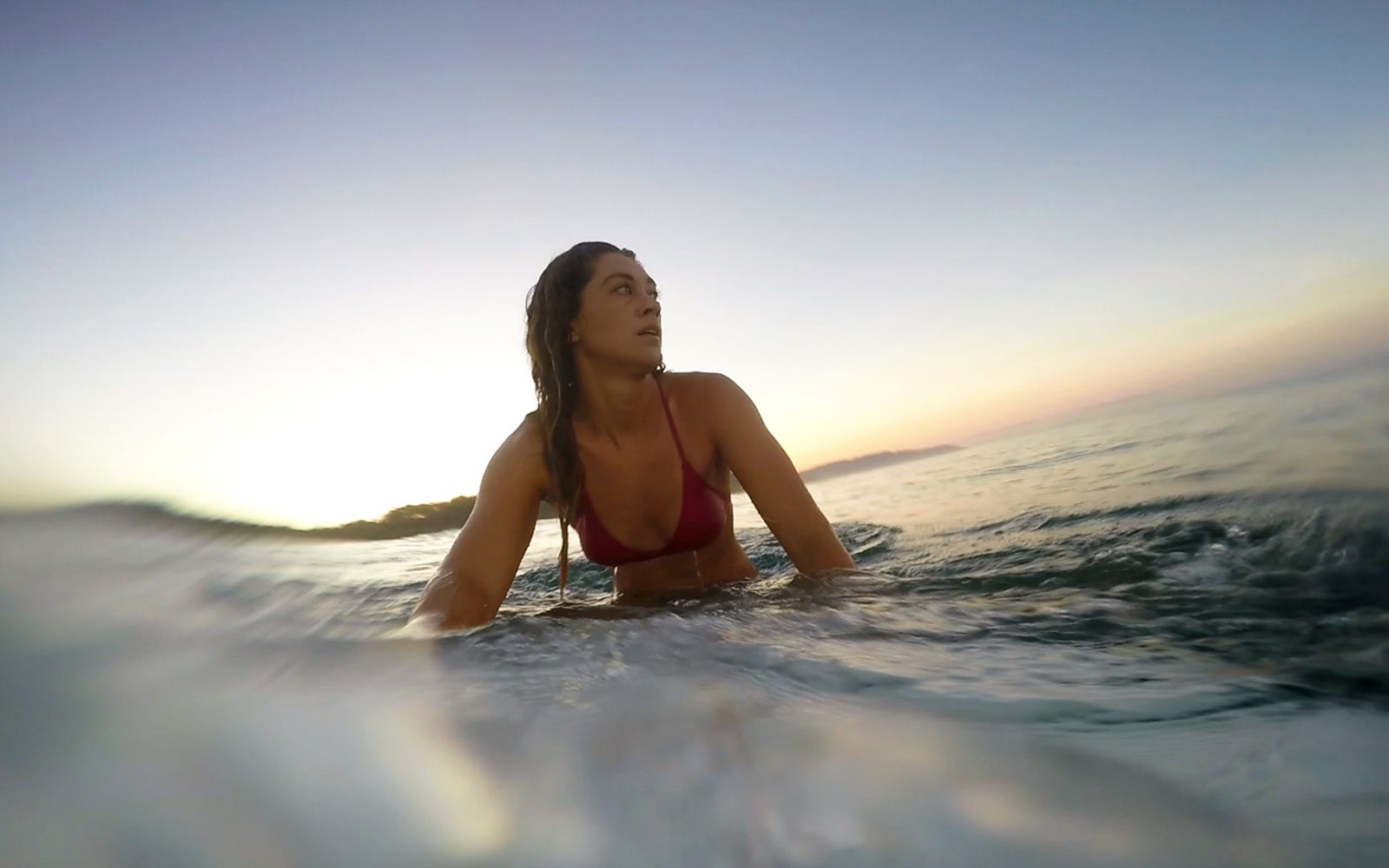 It is something that she said that has altered my mood this way.

The last three days every morning at 6 a.m. or a bit before, I go surfing. The morning is still, the tropical air steams from the ocean in the distance. The sun just barely begins to peer from behind the mountains creating a stellar sunrise. 15 minutes later, the sun pops up over the skyline and blasts golden rods in your eyes. It really feels magic.

The last few mornings he’s been out in the water. He casually floats by, says a brief hello and continues to float down the beach, half catching waves nearby, half catching waves just out of reach. I feel self conscious and preoccupied with getting waves, I’m minimally friendly, a deeper desire wanting more, but that’s not how it goes in reality.

After the last few days I had a glimmer of hope there would be a chance to meet you and become friends with you. That you were interested and on the same page.

It was almost irrelevant to her story, but I guess it was important for me to hear. I don’t 100% know if we were talking about the same person. But, small town, we likely were.

It asks me what I am doing here [my heart].

I thought I was following you I said.

Yeah but you’re not saving any money, you have no boyfriend, and today you are bored.

Bored. The word I wiped from my vocabulary when I was 12. To me it just meant you weren’t interesting enough to do anything interesting. Who wants that.

And now a bit of anger that this heat has brought up. The day feels long, the wind breezy but not cool enough. No one to be interested in. I start to think about what #### said the other day.

I’m committed to my heart…

… I thought my heart would jump right in and reply, as if it was going to finally, clearly declare what it wants.

But it doesn’t. And now I see I’m just committed to protecting it … encased in it’s fear.

Because who wants more pain and sadness than there already is in this world. Who wants more tears and who wants to be let down over and over again, no one showing up.

I hold it in, I try to stay strong but the tears now flow.

I flashback. Yeah you don’t want a dog, you won’t give that guy a chance …  Yeah, well he’s married I fight back. Ah, yeah, that’s how it goes he remarks. What the f* like it’s a normal thing?

Why can’t I meet anyone else?

And the lighthearted way I felt last week when I had an opportunity for a new love, is now gone. And, once again, my hope is shattered, after #### was convinced I should give him a chance. I mean my secret love, how strange a sign was that. And now this.

My emotions feel ping-ponged around. After I had been planning what I would say at our next encounter. And then caught daydreaming about how it would all go down…

I think back to how they say, this life is a lesson in learning how to be content amongst the ups and downs, the happy and the sad. But is that even possible. Is that realistic?

My heart is lost yet again.

And I question, again and again, where was it that I went wrong.

In my mind I hear an echo of my own voice while teaching yoga, you are exactly where you are supposed to be, you are ok, right in this moment.

I jump. Every now and then I hear a startling thud as a mango crashes down from the tree. The monkeys are back feasting on the fruit that’s too high for me to reach. Just out of grasp. Again.

I better shut the doors, I start to think, so they don’t get brave like last week and decide to come into the house looking for more fruit again.

Where did I go wrong and how can I course-correct the trajectory of this life? Even the monkeys are more interesting and successful than me…

Pieces of My Heart

An Offering, A Vision

This website uses cookies to improve your experience while you navigate through the website. Out of these, the cookies that are categorized as necessary are stored on your browser as they are essential for the working of basic functionalities of the website. We also use third-party cookies that help us analyze and understand how you use this website. These cookies will be stored in your browser only with your consent. You also have the option to opt-out of these cookies. But opting out of some of these cookies may affect your browsing experience.
Necessary Always Enabled
Necessary cookies are absolutely essential for the website to function properly. These cookies ensure basic functionalities and security features of the website, anonymously.
Functional
Functional cookies help to perform certain functionalities like sharing the content of the website on social media platforms, collect feedbacks, and other third-party features.
Performance
Performance cookies are used to understand and analyze the key performance indexes of the website which helps in delivering a better user experience for the visitors.
Analytics
Analytical cookies are used to understand how visitors interact with the website. These cookies help provide information on metrics the number of visitors, bounce rate, traffic source, etc.
Advertisement
Advertisement cookies are used to provide visitors with relevant ads and marketing campaigns. These cookies track visitors across websites and collect information to provide customized ads.
Others
Other uncategorized cookies are those that are being analyzed and have not been classified into a category as yet.
SAVE & ACCEPT